[PAST] The Lord of These Lands

Home to the wildest breeds of flora, Ninraih's entangled jungles cover southeastern Khy'eras. Ajteire, city of the Fae, is situated in the middle. Here, an overwhelming amount of magic and unexplained phenomenon has materialized. Read more...
Post Reply
1 post • Page 1 of 1 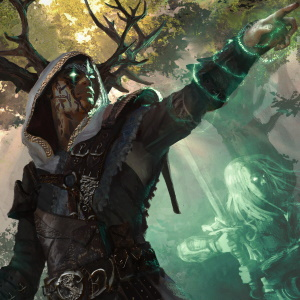 [PAST] The Lord of These Lands

His mother rarely had time for lessons any longer. The days when Harroc saw her grew further apart with each passing season. He was fourteen summers now; old enough to roam the wilds of Ninraih himself, she had told him. He knew she had much work to do. Many of the Druids of old were gone. Young Disciples of Balance were few even among the Elves and Fae. It was a difficult and isolated life, after all.

When she came to him on a spring evening, weary and marred by small gashes, he knew something must be very wrong. "Mother, what is so important you crash through the jungles to see me?" he asked her. She merely embraced him and held there for a long silent moment. When she released him and began to unload her bedroll Harroc knew he would receive answers in the morning.

The dawn came pale through the dense jungle canopy. Harroc woke to the sound and smell of cooking meat. He found his mother, leaning against great roots, watching him, a faint smile on her lips that didn't touch her eyes. "My son, today I will show you something earned many times over," she said, her voice soft, like the whisper of a stream. "We will meet one of the great beasts. The very lord of this land in which you roam." Harroc's mind raced with questions, but years of training held his tongue. There would be no further answers until after the meat was eaten.

It was late morning by the time they'd risen from camp. When his mother set off into the jungle without shifting, Harroc's need for answers became almost desperate. Dutifully he followed in her steps, buzzing with barely contained curiosity. As they passed through a vine thicket his mother finally spoke. "You have done well in your travels, my son. Your strength and endurance do you credit." She turned and eyed him as they passed back into open ground. "Your shifting has also grown stronger, but you lack something all Disciples of Balance must possess." Harroc's thoughts ground to a halt, all other questions forgotten. He was rigorous in his training and thorough in his duties. He received no answers from his mother as they passed deeper into the wilds.

They left the shaded paths of the jungle for a sparse clearing. Harroc's eyes flitted around the lightly packed grass in surprise. He'd never seen this place before, and they had traveled far from his normal paths. His mother suddenly halted and knelt down. Uncertain, Harroc mimicked the movement. Harroc knelt there, motionless and barely breathing, as the sun warmed his skin. Suddenly, he felt — more than heard — deep rhythmic breathing ahead. Lifting only his eyes, Harroc saw a massive creature. A wolf stood in the clearing, with paws the size of the Druid's chest and a jaw that could crush a tiger with room to spare.

His mother rose, a low keening coming from her throat as she took one step forward and offered her hand out. The wolf watched her approach, it's eyes bright with intelligence and understanding. A low rumbling, like boulders crashing through the jungle, came from the beast's chest as it lowered its muzzle into her open palm. "My old friend, I have brought you my son, my legacy." his mother said with a deep sadness. She leaned into the wolf's neck, pressing into the fur to hide her face. The beast closed its amber eyes and simply stood rumbling softly.

They stood there for long moments, comforting each other with the closeness of old friends. With a slow movement, Harroc's mother lifted her head and turned to face him. "This, my son, is Tata Cennaya, the great protector of this jungle." On a feeling, Harroc rose to his feet and bowed his head. His mother smiled faintly before continuing, "You will learn to take on his form. You will learn to act as his ambassador to the world." She rubbed at Tata's fur gently as she went on, "In doing so, you will complete your training as a Disciple of Balance and be tasked with finding your own disciples to train."
Word count: 697
Top
Post Reply
1 post • Page 1 of 1