There is an old joke that when Ixaziel unleashed nature unto Khy'eras, he fell asleep when it reached the region known as Ninraih. The land in the southeastern part of Khy'eras is filled with exotic, overgrown flora and jungle so thick that portions of the area remain undiscovered. Typically, it is very easy for a person to get lost in the winding mass of trees and vines. However, races like the Fae and Elves have made this wilderness (specifically Ajteire) their home and have adapted to their surroundings better than the everyday adventurer. Several Ninraih residents state that if a person were to climb the highest trees of the jungle at night, the star-scaped scenery is an awe-inspiring sight to behold.

Those who do pass through Ninraih have become accustomed to seeing extraordinary and strange events as well as unique brands of magic. In fact, a great portion of magic has surfaced from this side of the realm.

Ninraih's weather tends to change on a sudden whim and is often unpredictable. While one should expect it to be hot and muggy inside the jungle (varying in the 90 to 100 degree range), this can transform into violent thunderstorms or downfalls of rain. Thankfully, the cover of leaves from the trees keep out much of the deluge and when the rain does slow, mist fills the jungle and moisture cools the area.

When passing through the region of Ninraih, even a tiny bit of knowledge on the area should assist a person as they step foot onto the land. After all, unfamiliarity with one's whereabouts may prove troublesome. 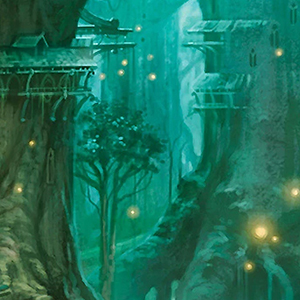 During the Undead War, countless people were enslaved for the magic that they had inherited from Bhelest. The Fae, a characteristically magical race, feared that they might become part of that group and searched Khy'eras for a home. In the heart of Ninraih's jungles, they created the city of Ajteire. To further protect themselves from the undead, they used the magic of fireflies and later, forged a partnership with the Kerasoka Elves. Moreover, the complex network of trees, vines, and plants helped to keep unwanted visitors out. Life in Ajteire is based on a community-type structure where tasks are shared and goods are traded through skill rather than currency. It is quite peaceful and one of the few places where folks are accepting to an open display of magic. Read more...

Lament of the Willow

Central river that runs through and branches off into various zones in Khy'eras.