The Wind at Our Backs

Home to the wildest breeds of flora, Ninraih's entangled jungles cover southeastern Khy'eras. Ajteire, city of the Fae, is situated in the middle. Here, an overwhelming amount of magic and unexplained phenomenon has materialized. Read more...
Post Reply
11 posts 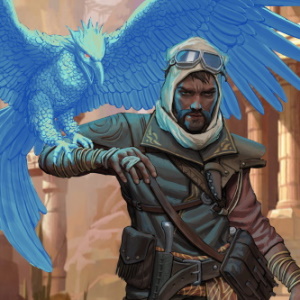 Re: The Wind at Our Backs

Ahtair could barely keep a grin from his face as he guided his sister, and ostensibly Master Velca, away from the docks. He knew quite well she found Iishraq uninteresting beyond a casual appreciation for the creature’s majesty. Fortunately, such simple things as disinterest did little to dull her social graces; even less so when she found a person of interest.

When Master Velca asked about the bird himself, Ahtair spoke up, “Iishraq is the ancestral spirit of a glittering sand vulture, native to our homeland of the Golden Sea, a distant place across the vast oceans.” The bird puffed up his chest, ruffling himself proudly as he was discussed.

“A proud and noble creature who guides our peoples across the unforgiving sands to food and shelter. He has been passed down in our community for generations, and now through the grace of the sun and moon he guides me,” Ahtair spoke with clear reverence and joy in his voice, his expression far more animated than usual. The tattoos he bore marking his right to summon the vulture pulsed faintly as he thought of them.

As they neared the tavern and its neighboring inn, Ahtair could see the shift in Master Velca’s focus towards his crew. When the man moved to hold the door he held back his own reflex to do the same and instead stepped aside to allow Shahira to pass.

“Of course, do not let us keep you from checking on the health of your vessel and crew,” he said with a respectful nod for the Kerasokan as he followed his sister into the drinking hall. He held a chair for her as they approached what over the years had become their usual table.

Most who entered the place were looking to get away from their usual duties and so cared little to actually see the goings on of the small industrious town. As such, the worn and slightly warped wood of the heavy table and chairs rested in the corner of the room between two thick and salt-crusted windows. One looked down the only real street of Cetnisadel Bay, the other looked out clearly on the approach to the wharfs.


As they settled, a younger woman with the distinctly dark skin and dazzling blue eyes that marked her as one of their people approached the table with a soft smile. “A poor day then, Ahtair?” she asked, her voice light and musical, as she clearly ignored Shahira. “I will fetch the usual to cheer you up.”

Ahtair chuckled softly to himself as he looked at Jamila. She was a beautiful woman in her own right, but he had watched her grow and found he could only see the brave but foolish girl of his youth. “Jamila, you have the right of it, but please, prepare us a full course. We have an esteemed guest, and I would not shame our people by showing him poor hospitality.”

He watched the shift in her expressions moving like lightning across the clouds. First there was a pleased smile, perhaps for his easy reply, then a small flash of confusion and annoyance, likely for the extra difficulties in preparing a complete tea course, and finally a look of reserved excitement that was most certainly intended for the as of yet unrevealed guest.

Jamila moved away with after a practiced bow, her usual attempts at endearment forgotten under the auspice of a guest worthy of a full tea course. As she disappeared into the kitchen, Master Velca approached and settled himself across from them.

Ahtair offered the man another nod, finding he was showing much more than his usual outward respect today. “I hope you find your crew in good health, or at least on the mend as their vessel is,” he offered, keeping his pleasantries to a minimum so as not to intrude on his sister’s desires and talents.
Word count: 652
Top
Post Reply
11 posts