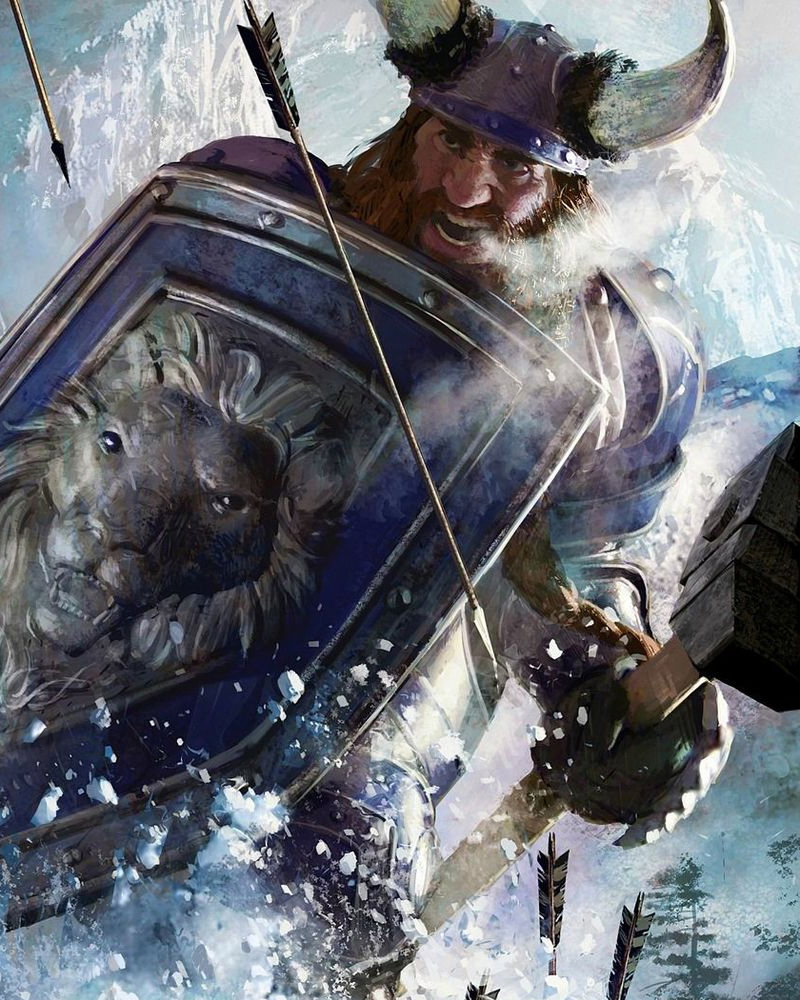 Strengths:
Reliant on innate characteristics, a Dwarf draws vigor from frequent weapon training and knowledge in combat tactics. Their prowess is motivated by bravery and a chance to impress fellow kinsfolk.
Weaknesses:
If a person counted the number of times a Dwarf's stubbornness blocked a wise choice, that person would be richer indeed. Though Dwarves boast sustainment without magic, this has occasionally gotten them killed when they could have accepted a bit of magical healing. Some underestimate mage opponents, choosing not to accept that magic could ever triumph in contrast to the raw, brute force of a body.
Magical Aptitude:
It is unclear if Dwarves have any inkling of magic within them. There are no records and there are certainly no Dwarves willing to attempt or admit it. So, while it may not be impossible, the age when a Dwarf could grasp the concept of magic has yet (or ever) to be determined.

Besides a lingering mask of headstrong qualities, Dwarves have no alternate physiques to switch into. Tolerant and curious half-Dwarves might meddle in Transfiguration, but full bloods would never be caught dead toying with magical transformations.

The dawn of Dwarven history started with the sunset of the Irenohl who constructed the northern city, Domrhask. When the city was freed because of Bhelest's defeat, the formerly captured Irenohl broke their chains and regained control of their home. In doing so, the harder exterior of the golems cracked by a wave of energy and from inside, the much shorter and stockier Dwarves stepped forth. When the Dwarven race was created, the Irenohl became extinct, to not be seen again.

No one knows exactly why the transformation of the Irenohl occurred, but many speculate that it was pent up emotional energy being stored inside the stone creatures. During their imprisonment, the Irenohl worked tirelessly and without pause. They were familiar with complex work, but their tasks had never been based on warfare or hostility. The golems did not react to enslavement and were internally confused on whether or not to feel anger or sadness. The Dwarves, after the Irenohl broke, became a by-product of suffocated emotions.

To the Dwarves, a race that would become commonly described as stubborn, realistic, and hardy, this seemed like a tall tale of make believe. Though they agreed that they were birthed from an ancestry of rock creatures, Dwarves state their burst from the Irenohl is nothing more than motivation for control and independence. With their self-awareness and newfound status as a Khy'eras race came a sense of responsibility: that they could care for and sustain Domrhask.

Unfortunately, not all Dwarves came to an equal agreement about Domrhask's position. An abundance of Dwarves were bitter and filled with an intense hatred for those that had watched from afar as Domrhask fell. It was true that other cities were swept up in their own conflicts, but for the unforgiving Dwarves, this was not a valid excuse. They declared that Domrhask should seek dominion over Khy'eras and in retribution, enslave the realm's denizens. What's more is that they attempted to constantly over-mine resources from the magnificent tree Thraora that dwelled inside the mountain.

Because of this, these Dwarves were defied by their fellow kinsmen and banished from Domrhask. As they left the gates, they transformed into small, bony, and withered-looking creatures called "Goblins" or fierce, malevolent bodies with tusked mouths called "Orcs". Both of these races have dark gray, brown, or green skin tones allowing them to easily slither off and blend into the gloomiest parts of mountains or swamps that fester exclusively with decay. The remaining Dwarves in Domrhask worked together to return the city to its former grandeur. Though the Dwarves are exceptional when working alongside each other - claiming all are family no matter the blood - they are regularly unwelcoming to outsiders, especially those who have embraced or wielded magic. Not to mention, Thraora's bark and leaves are constantly sought by visiting merchants, so they tend to keep a guarded eye on Domrhask's mines.

Select, universally used words come to mind for describing a Dwarf: fortitude, tenacity, and perseverance. Dwarves have unmatched dedication to their technique and families, therefore, if a person has a need for objects or talents that will endure, they would do best to find a Dwarven crafter or adventurer. Dwarves have a single track inside their mind that keeps them focused. Not to mention, they are happy to contest with whatever task they are assigned - whether this is from baking bread to creating a sword to taking down a colossal mountain grizzly.

Those receptions aside, Dwarves have famously pushed outsiders and "lesser folk" away - in particular magic users or magically inclined races, those who alter appearances, sexual deviants, and weaker bodied souls. Nevertheless, should another adventurer (by chance) be granted the favor and companionship of a Dwarf, they would discover that Dwarf to be a life-long friend. Dwarves have proven to be durable allies in battles and exemplary people on subjects of weaponry, armor, and of course, ale of all flavors.

}
A child is conceived (through fertilization) and carried within its mother typically delivered at ten to twelve months.

}
Introduces puberty and biological events influenced by emotional, sexual, or cultural changes. Starting at about 12 or 14 years, male Dwarves start to sprout beards.

}
The physical process of deterioration by graying/whitening of hair (and beards), wrinkling of skin, etc.