Building or Burning Bridges - A Slip and a Snap!

Loxiel has to think quick to save himself from near death!

In the heart of Ninraih's jungles, the Fae created the city of Ajteire, protected from the undead by the magic of fireflies and a pact with the Kerasoka. The complex network of trees, vines, and plants helps to keep unwanted visitors out. Read more...
Post Reply
1 post • Page 1 of 1 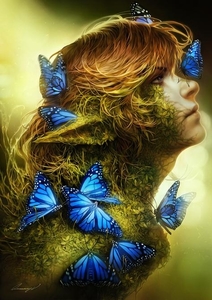 Building or Burning Bridges - A Slip and a Snap!

“I understand you wanting to go off on adventures,” Mistress Karya said, as they walked the wooden walkways in the city of Ajteire. “But you’ll need a place to call home, and though I have had you from being a very little boy, your room may someday be needed by another orphan.”

Loxiel nodded his head solemnly. “I understand, of course.” He said. Though he had never truly enjoyed living at the orphanage … orphans might have tragic stories, but they were still children, and children could be cruel. He had always been teased about his lack of magical abilities, or indeed any magic at all! It seemed they didn’t view his ability to shift to be magic in it’s own right. “I’ll look for something right away.”

The old elf, shook her head a little. “I don’t mean for you to pack your bags and go this instance, Lox! Take your time finding somewhere; you have a home with me until you do. I believe there are rooms across the city that you might be able to afford, now that you’ve some skill in hunting.” She gave his shoulder an affectionate squeeze. “But keep in mind, that if you’re going to maintain your habits for spending days on end out in the jungle, try to find something well within your means.” Mistress Karla straightened, and winced a little. “Oh, my poor old back! Years of making beds have taken their toll on this old body. I think I’ll go see Ankya about a little pain relief. Where are you off to, today?”

Loxiel hated seeing her in pain. She was very old, even for an Elf, and one day he would have to accept … he shook his head against that thought. “I’m heading for the watchtower. Going to do a little observation training and plus, it’s an easy place to fly from to head into the jungle.”

Mistress Karla smiled. “The ever adventurous hawk! Have a fine day, my dear.”

Loxiel watched her walk away with a sad look in his eyes. He wished he had truly been born her son, though even that thought felt like a betrayal of his own mother … a mother he could not even picture in his head, or hear her voice. He had long stopped wishing he had known who his father had been, or that his mother was still alive. Those wishes were in vain, and they only brought him sadness. With a small sigh, he set off.

Treating himself to an apple (he could always find something sweeter in the jungle), Loxiel made his way along the walkways that made up a maze like map amongst the trees. It was a fine day, with the sun pushing showing his face in the forms of warming beams through the thinner canopy of the city.

And then, with a snapping sound, Loxiel suddenly found himself falling …

Everything seemed to happen in both an instant and in horrible slow motion, all at once. The wooden platform had come loose, splintered and cracked. The apple fell from his hand and he heard someone shout in alarm.

It was instinct that made him shift into his hawk form. It hadn’t been the first time he had fallen, and his mind responded with the immediacy of the event. In a haze of smoke, where a falling young Changeling had been, was now a forked tail, blue headed hawk, frantically flapping its wings, trying to catch the air and save him from falling.

But fate was conspiring against him, and a piece of the wooden platform hit him. A screech of pain sounded from him as he felt something crack in one of his wings. When he tried to continue to battle to stay in the air, the pain shuddered through him, and he knew he wouldn’t be able to stay aloft.

He managed a few more beats until he did what he hated doing; shifting one form to another, rather than to his original. It took more effort, and when one was falling …

His wing cracked again, and the screech that escaped him told of his agony. But he tried: he shifted.

When the smoke vanished from the falling entity, a cat had taken the place of the hawk. Silvery coat, with black spots and large, tufted ears; Loxiel’s cat form was the only chance he had at surviving this fall. A cat always landed on its feet … right?

Loxiel’s fall came to an abrupt end as he hit the forest floor, as did parts of the broken platform. Sure enough, he had landed on his feet. Had he not been in cat-form, he would either be dead, or gravely injured. Though he would later say he had been lucky to avoid either, at the time he gave out a yowl of agony, before shifting back into his regular form.

Loxiel, gasping in horrific pain, glanced down at himself, covered in splintered wood, to see his arm bent in a way that it should certainly not be bent. And at that, he passed out.

“Thank you, I think I can manage it. I promise I will ask if I can’t.”

Sitting up in bed, Loxiel now sported much bruising, and his left arm was held fast in a splint. The potions that had been given to him by the healer had certainly dulled the pain, but they left him feeling groggy, and he seemed to have spent more time sleeping in the last week since the accident than he had done in his whole life.

“Be sure you do,” the healer said. The Fae who was treating him was a brusque, but caring man who had been the first face the Changeling had seen when he had awoken, which he had done so in this very bed.

From what he had been told, those that had seen the bridge collapse from under him had quickly gotten down to him and the healer called. He had fainted, and the healer had been quite concerned that his head might have taken damage too. Loxiel had had to endure answering a barrage of mundane questions to make sure he hadn’t knocked himself senseless. It took the healer far longer than Loxiel had wished to declare that the boy still had his wits.

The broth that he ate each day, along with every other meal, all came with a tonic on the side to speed up the healing process. Loxiel had been beside himself with anxiety at the broken arm; would this affect his being able to fly? He would often stare at the broken arm, willing it to fix and heal faster, so he could take to the skies again.

“A clean break,” Inya had said when she had visited, Loxiel had expressed his fears. “Healer says you should be up and flapping away in a few weeks of rest, and then a few more gathering your strength.” She had shaken her head. “I didn’t train you as I did, just so you could be killed by a neglected walkway, little hawk.”

Mistress Karla had been beside herself, even scolding him, as if somehow it was his fault! But it was clear that it had all come from her fear at almost losing one of her children (even though he was a man grown now). “Oh you … I would give a slap on the legs if I wasn’t so relieved that you were okay.”

“Ouch!” The broth dripped onto his bare chest. He put the spoon into the bowl and sighed in frustration. Everyone was telling him to rest, or ‘take it slow’, and not push himself too hard. But he was so eager to get better.

He turned his eyes out of the small window a few steps from his bed, he felt the call of the jungle. And though he was grateful to the healer, the thought of not being able to go exploring for at least a month, maybe two, felt like he had been thrown into a prison.

The broth would not defeat him though. Loxiel raised it to his lips, took a sip of the hot liquid, and smiled in triumph, as if he had achieved some major feat. “I’ll be back on the wing before I know it,” he said, but alas, with not much conviction.
Word count: 1410
Top
Post Reply
1 post • Page 1 of 1