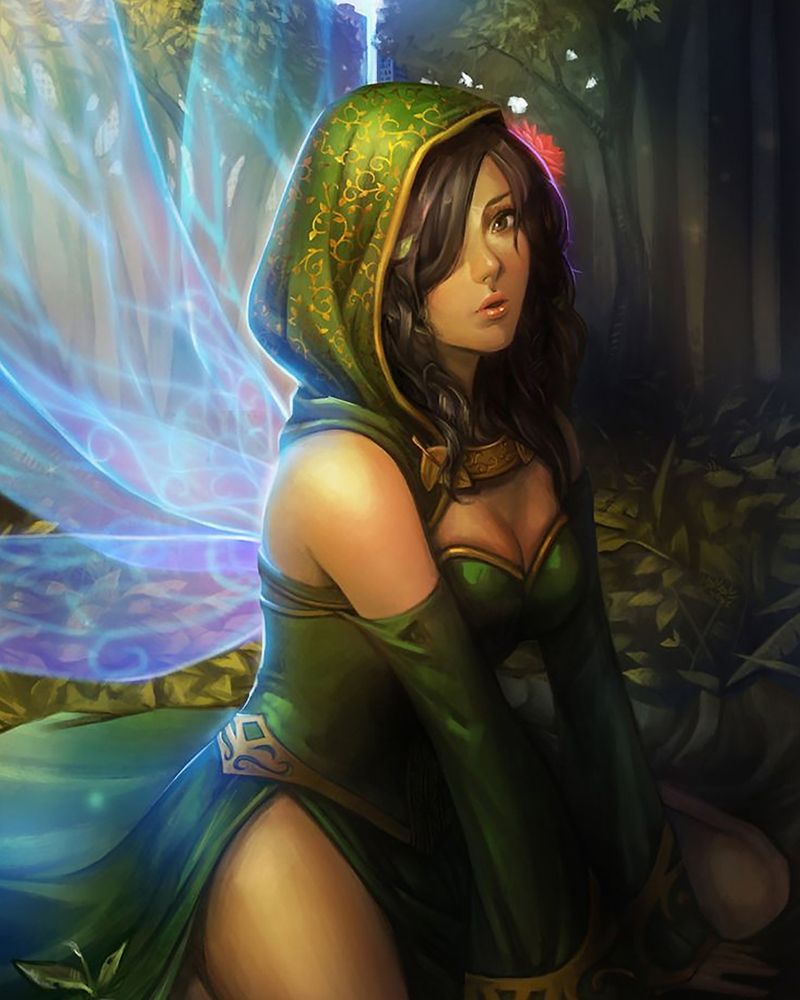 Complexion:
Faint cool colors (blue, green, purple), white, tan, or brown
Hair:
Any color
Eyes:
^ Same as above
Height:
Men: 4'8 to 5'0 feet, Women: 4'1 to 4'10 feet, Shifted: 1 to 2.5 inches
Weight:
Men: 100 to 165 pounds, Women: 90 to 145 pounds, Shifted: Unknown
Other:
Pointed ears two to four inches long with slightly rounded tips. Fae are born with wings that appear gossamer and delicate, but these appendages are not easily torn and can carry the body's weight (plus extra) during flight. Wings come in diverse colors, shapes, and designs, from translucent to glowing to butterfly-like or simple colors. Wings are often partitioned into four segments (two on each side of the back), but Fae have been seen with varying segmentation in wings.

Strengths:
While majority of Fae can use all types of magic, they are also interested in subjects that help them navigate the world. The Fae have natural flight abilities enabling them to evade enemies that are primarily on land.
Weaknesses:
Though Fae can improve the toughness of their physique, they are not always the best at wielding steel (or any weaponry) to protect themselves. Their height transformation may prove a hindrance if they are caught; in this form, they can be contained in a jar or even squished like a bug.
Magical Aptitude:
All forms of magic come to Fae instinctively. They practice magic with little to no effort, but do so with respect and try to understand - through study - each energy they are manipulating.

Fae can fluidly alter their body so it is resized down to one to two and a half inches in height. To the carefully inspecting eye, the Fae looks the same as their regular body only shrunk down. Such transformation gives Fae a chance to be stealthy and perform tasks like picking locks. However, this shape occasionally comes with a glowing light that is cast much like a firefly and for certain Fae, this could be difficult to control. Their shift may prove a hindrance if they are caught; in this form, Fae can be contained in a jar or even squished like a bug.

During the resurrection of Khy'eras, it was said that Ixaziel did not originally create the Fae as they are seen today. Instead, they were exquisite birds with bright feathers in an infinite selection colors. Each bird was remarkable and its vibrancy could be noticed even when flying high in the sky. But with no real explanation, Ixaziel took the birds from the sky or their homes where they nested in the mountains and brought them to the earth. Some say it was because he felt impending doom in the air and that with Bhelest's tyranny looming, the mage was sure to capture the birds and use them as currency or a food source.

When the birds where left on the ground by Ixaziel, they assumed a form which resembled a small sized Human, unnoticeable and not extravagant. This was what Ixaziel wanted, but it was not what the Fae wanted, much to the Eidolon's confusion. The Fae started to wither, unable to find purpose on the land or understand why they had been taken away from the sky, that great entity which they adored so much. In their heartache, the wilder beasts of Khy'eras picked them off as fragile prey.

Ixaziel, attempting to correct what was done, again gave them wings adorned upon their back so that they might fly. The wings were not of feathers, but were gossamer-like and reflected the vivid hues they remembered from their past. Though the Fae could not fly nearly as high, their set of wings gave them renewed purpose and contentedness.

For several ages, the Fae attempted to live in relative harmony, but when the Eidolons were exiled, their presence became a threat to Bhelest. Perhaps it was due to the fact that the Fae were one of the original races, but they took to and embraced magic more competently than other races. Specifically, they excelled at defensive and healing magic, which gave them the ability to protect not only themselves, but folk who fought against the tyrant mage.

Under the assumption that they would be hunted down (and it was a good assumption), the Fae headed towards the jungles of Ninraih. In approximately the center, they founded the city called "Ajteire". The thick, entwining flora shrouded them from numerous evils in the realm and later, the Fae formed an alliance with the Kerasoka Elves, leaving their race as an ever-present force.

Although a magically inclined race, folk are typically unconcerned with seeing Fae in cities. This may be due to a few reasons. First, Fae are respectful and restrained when it comes to magic, practicing it within Ajteire or out on the fields. Second, they are petite creatures and people believe the Fae are easily overpowered. And last but not least, there is a level of respect since the Fae founded a city in the heart of Ninraih's dangerous jungle during an ongoing war, saving races (like the Kerasoka) and refugees from expiring.

With the above, Fae can almost always travel about, form connections with unlike races, and establish their lineage without worry. There are clusters of people who'd rather wrestle a bear than touch a Fae due to the whole arcane energy, but should it become a major problem, Fae can work out these complications in whatever methods they prefer.

}
A child is conceived (through fertilization) and carried within its mother typically delivered at five months.

}
Growth of wings and development of motor, social, and learning skills.

}
During the early years of this stage, Fae grasp the skills necessary for flight despite wings flourishing in Childhood. Introduces puberty and biological events influenced by emotional, sexual, or cultural changes.

}
The physical process of deterioration through slight wrinkling of skin and frailer limbs. Fae hair color does not fade and gray.