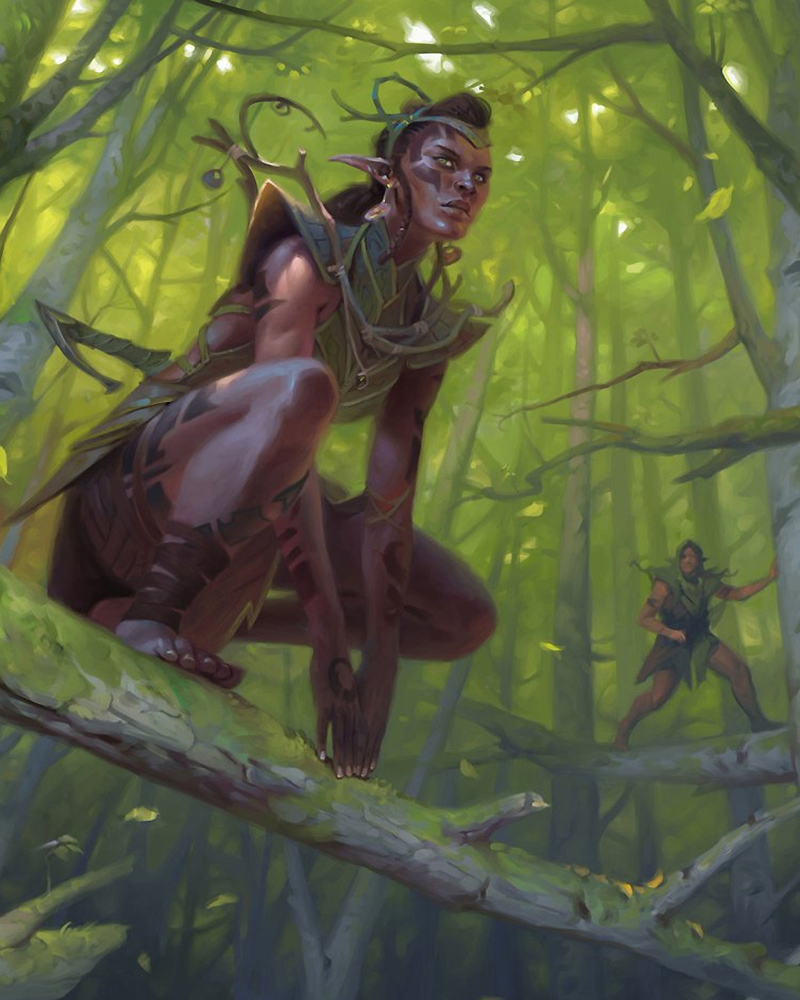 Strengths:
To fill the void of lost magic, Kerasoka Elves became expert hunters and rangers. Knowledge such as forestry and biology is practically innate to them; this is helpful considering their home in the jungles of Ajteire. They are accomplished with projectile weapons such as bows, boomerangs, and darts. As for natural abilities, Kerasoka have enhanced agility and reflexes as well as keen eyesight allowing them to see miles into the distance.
Weaknesses:
Cannot use magic of any sort and are occasionally dependent on those who can use it.
Magical Aptitude:
Bhelest stripped their magic away and they have not re-acquired this ability.

Kerasoka have no transformation feats and cannot use magic branches such as Transfiguration.

At the start, Ixaziel created the Elves believing that they would always retain their characteristic humble pride and harmony with each other and the rest of the world. With the Elves' gracious attitudes, the Eidolon was self-assured that they would be able to absorb more knowledge about the world in comparison to the rest of the races. The Elves would become the record keepers of history. However, the thought of an unparalleled balance between Elves was shattered when Bhelest took control of the realm and exiled the Eidolons.

With the beginning of Bhelest's rise in dominance, the Elves were not completely sure how to adapt. They were creatures of experience and had always attempted to learn as much as they could. When magic was unleashed, they took to it naturally without thinking and did not know how to process the abilities. This moment was where the division began. While one side suggested unrestrained magic was the answer, the other did not.

To further damage any prior union the Elves had, therein arose the heated discussion on whether the Elves should remain fighting in the war. After countless bitter and in-depth conversations, unable to determine a resolution, the Elves split into two tribes: Kerasoka and Lumeacia. The Kerasoka Elves lingered on the front lines of Khy'eras and continued combat engagements against Bhelest and his legions. Unfortunately, their resistance was viewed as a hindrance to Bhelest and he exclusively stripped them of their magical energy.

Bhelest's severing of arcane talents from the Kerasoka was a widespread incident that had numerous outcomes. It was a sudden, unpreventable occurrence that swept the land in a rapid, invisible pulse. For some, the sensation was akin to having a limb forcibly removed, a loss of breaths, or no feeling at all. Unanimously, there was sadness and emptiness and although Kerasoka were not born with magic, the energies had once become a part of them and then removed. Folk have called it a curse and others have called it vengeance. Whatever the case, to this day, there is no known cure and no Kerasoka Elf that can use magic.

Survival became difficult for the Kerasoka Elves and routine intelligence and skills with weaponry proved worthless. The community was being picked off and could not find the opportunity to evolve and acquire defensive tactics. Hearing of their troubles, the Fae who had established Ajteire offered an alliance with the Kerasoka Elves so both groups could provide extra protection for each other. Where the Elves could no longer use magic, the Fae could and where the Fae lacked with weaponry, the Kerasoka became admirable fighters

The Kerasoka Elves were initially hesitant regarding their partnership with the Fae as they had been, in simple terms, abandoned by the Lumeacia. Nevertheless, the growing kinship and respect between the Kerasoka and the Fae was beneficial. The Kerasoka now had a home in Ajteire and gradually, their population grew again.

For the majority, Kerasoka are perceived as Humans that are very tall with extended life spans. Because they are non-magical beings, they are often dismissed as allies for being incompetent and expendable. However, this couldn't be further from the truth. A wise person understands that all Kerasoka are born with talents that can become exceptional when properly developed. This list includes - to name a few things - excellent hearing, far-reaching vision, dexterity, and tracking.

Alongside their more athletic capabilities, Kerasoka are understanding, defenders and admirers of nature (usually), and exhibit the calmest set of nerves out of all Khy'eras races. Therefore, they are easily approachable and folk do not feel threatened or insecure when talking to these Elves. And since a fair handful of Kerasoka have been alive through Khy'eras' great struggles, they are sources of wisdom.

}
The Kerasoka physical process of deterioration is very slow and can be non-existent. Graying/whitening of hair, wrinkling of skin, or frailer muscles are all faint changes that might happen.