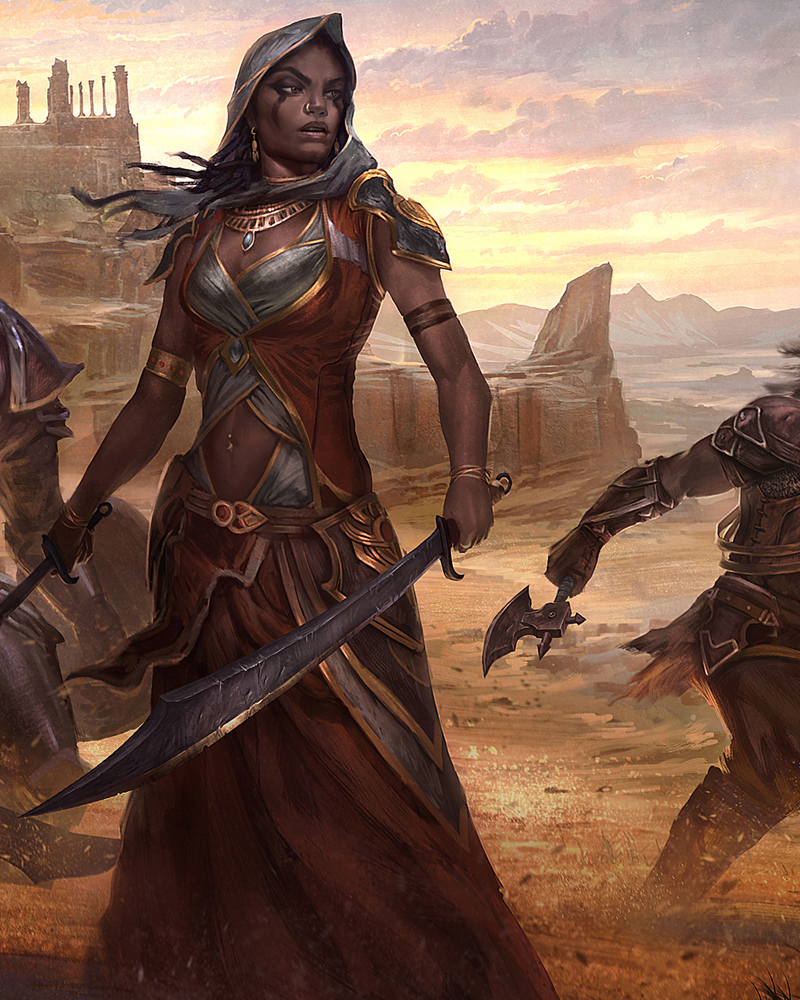 Strengths:
Their adaptability, willingness to learn, and courage. While this may not appear much, they are able to surprise enemies that were not expecting a decent fight.
Weaknesses:
Humans are mortal beings and as such, can regularly be subjected to sickness, disease, and death. They are more careful when traveling... usually.
Magical Aptitude:
By and large, Humans are not born with magic abilities, but that does not mean they aren't capable of learning magic. It can be grasped at a very young age, but takes a lengthy time to learn. Those who wield the elements are at least 18 winters before they can fathom the concept or have a valuable arsenal of spells.

There are no innate transformations that Humans possess, but as a Druid, Transfiguration magic may be acquired. Humans that can fluidly change into forms without magic are Shapeshifters.

To a number of Khy'eras historians who have studied the realm's background, there is an ever-lingering debate to determine why Ixaziel chose Humans - alongside the Elves and Fae - as one of the original races. An explanation (or tall tale) is that after the Eidolon of Nature crafted exquisite landscapes of trees and mountains, a plethora of creatures and fauna, and the Fae and Elves, Pheriss challenged Ixaziel stating the Eidolon was simply unable to make anything ordinary. Proud of the work already accomplished, Ixaziel translated this as an offense and for the ultimate touch to Khy'eras, the Eidolon took less appealing characteristics of Elves, and thus, Humans were born.

Others claim Humans were merely intended to be vessels for significant plot points along Khy'eras' timeline - such as the foundation of Shapeshifters and Korcais. Or, on the grimmer side of things, they were actually placed onto the realm to serve as prey for hungry and forceful beasts. There was never supposed to be anything magnificent that came out of the Human race. This theory, consequently, has been proven incorrect time and time over.

Humans have displayed remarkable adaptability to the changing world around them. there is adventure and unexplored areas, they are likely to be among the first to set out. When there is a threat to the land, Humans offer soldiers for combat and surprise their enemies with a defiant willingness to survive - even with the knowledge that they are mortal and can succumb to death. The concept of limited time on Khy'eras has given them greater fortitude and inspiration for doing what they can while they are alive. Humans have prolonged their position within the realm as a race that cannot be wiped out without a struggle.

Throughout the passing of years, there have been several momentous occasions where Humans played a main role in Khy'eras. Many recall a substantial, grisly time in Khy'eras' history was carved by a Human named Bhelest who unleashed magic and chaos. And following Bhelest's wars, the realm was saved by a Human inventor - Cecilia - who was deemed to be an "average" girl and turned out to be anything but.

What a reader can take away from this is to not underestimate Humans who may seem plain and uninteresting. They may be full of unexpected surprises both wonderful and dangerous.

Overall, Khy'eras denizens - regardless of race - view Humans as flexible, curious, and replaceable. As they are the most prevalent of all races, they are not widely feared, though history has illustrated that they can be unpredictable when struggling for dominance or when pinned against a wall. Humans are also trustworthy - for better or for worse. Dragons, for example, confided in them and because of this, Dragons advanced their knowledge and eventually established the hybrid Ue'drahc race.

Humans are sponges for emotions. In addition to being fueled by feelings like love, sadness, and hate, they are prone to creating prejudices and intolerance, and with such an extensive population, these sentiments tend to spread easily.

}
The physical process of deterioration by graying/whitening of hair, wrinkling of skin, feeble muscle structure, etc.