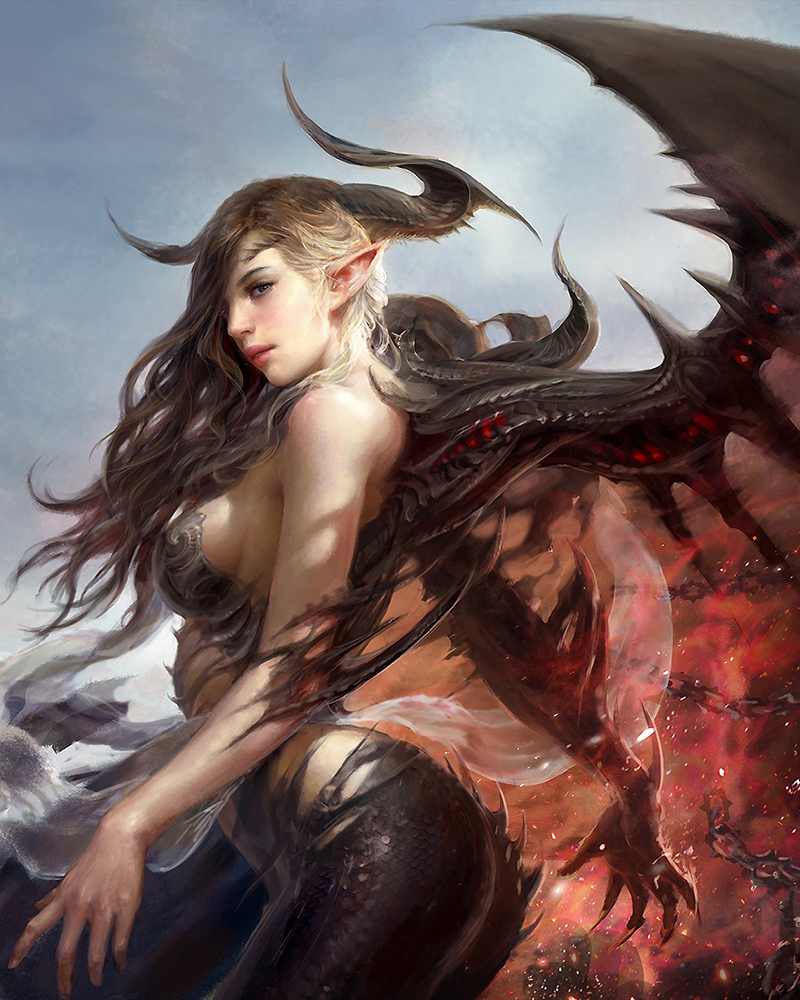 Special Note:
The image here is a rough illustration of Ue'drahc appearance. The below description is more accurate.
Complexion:
Skin can be white, tan, red/brown, brown, or black, whereas scales can be any color
Hair:
Brown, black, red, blonde, white, or gray
Eyes:
Brown, black, blue, green, hazel, gray (rare), or red (rare)
Height:
Men: 6'5 to 8'4 feet, Women: 5'8 to 7'7 feet
Weight:
Men: 180 to 280 pounds, Women: 160 to 250 pounds
Other:
Scales decorate arms (approximately to elbow), legs (approximately to above knee), and portions of the back. Hands and feet resemble a Dragon, complete with claws and talons. Scaled appendages are slightly thicker and more muscular than Humans limbs. Ue'drahc have horns (up to four inches) - curled or directed upwards - sprouting anywhere between the temple and behind ears. Some have pointed ears around two inches in length and others have rounded Human ears. A set of leathery wings are upon their back (each segment spanning up to twice the Ue'drahc's height) and the race may or may not have scale-covered tails.

Strengths:
Having a likeness to Dragons, the Ue'drahc use mighty arms to wield weapons or powerful legs to kick enemies over ten feet away. Ue'drahc prefer hand-to-hand combat over weaponry, pushing their enemies aside then springing back into them with unexpected attacks. Their nail and feet talons are fatal and can slice open skin. Wings enable them to fly.
Weaknesses:
While scales protect parts of their bodies, areas such as the chest, stomach, and face give blades access to fleshy tissue. An Ue'drahc's movement is slower than most races, though nowhere comparable to a Dragon.
Magical Aptitude:
The Ue'drahc have not retained their elemental breath magic from Dragons, but they are able to cast energies the same as any capable person. Since they can successfully hold weapons, staffs and wands are said to give them elevated control over magic.

It is known that magically inclined Dragons may use Transfiguration magic to alter their appearance into races or animals. Unfortunately, Ue'drahc did not inherit this talent and have no inborn transformations, thus only a Ue'drahc Druid can consider limited, alternative forms.

Long after Dragons resided in seclusion, the beasts sent the tiniest of their clans to seek out Humans that would be willing to tutor them. Due to being blocked from society, learning was impaired and as Human scholars eventually arrived, this gap was filled. Though Elves (especially the Lumeacia) were prime retainers of knowledge, the Dragons selected Humans as their educators because they felt unlike most Khy'eras' races, Humans were average and by fabricated accounts, deemed unremarkable. Yet, Humans possessed things no races did because of their absence of features and abilities - such as will and survival instincts. In some ways, the Dragons could relate.

Dragons had never considered bringing outside races into their gatherings with Humans, but what about internal members? A handful of Dragons wished to go exploring with their newfound knowledge, but travelling into a realm that contained people who shunned their existence and still blamed the race for troublesome, historical events seemed like disastrous idea. What if Dragons could utilize Humans? Through combined efforts and many lessons, Humans and Dragons read about "Hybridization", a science abandoned centuries ago.

With what was learned, Humans procured vials of their blood (mixed with a verbose list of supplementary ingredients) and with permission and encouragement of the Dragons, injected it into the beasts. At once, the Dragons transformed into half versions of their Human counterparts. This being had the face, torso, and waist of Humans, but their muscular lower arms and legs were layered with scales and had adornments of deadly claws and talons. They kept a pair of wings on their back and a crown of horns on their head framed by soft hair. When about a hundred or so were constructed, they could procreate with their own (and even Humans) to further establish their race, henceforth known as the "Ue'drahc".

An overall goal was for the Ue'drahc to join Humans on their quest for knowledge, doubling the efforts of what Dragons could learn about Khy'eras. When Ue'drahc did wander alone from the safe haven of Dragons and were noticed by outsiders, they were assaulted or killed on sight. Denizens of the realm were confused on witnessing strange, reptilian Humans and spared no chance for explanation. Murder did not sway the Ue'drahc. They continued with their purpose to report back to their Dragon kindred.

As time progressed, Ue'drahc wisely chose to roam the lands with Human mediators who explained to various communities the history and development of the Dragon-blooded race. The Ue'drahc were easily welcomed in Ajteire and were ultimately accepted (although begrudgingly) by folk in cities such as Fellsgard and Domrhask. Certain Ue'drahc are cautious and completely cover their hands, feet, and head as best as they can, while the remaining gamble with chance meetings. Those who decide to befriend Ue'drahc appreciate the species' fortitude and ancient bloodlines, finding them to be worthy partners. Sadly, there are charlatans that support Ue'drahc and attempt to get into their good graces because they desire to learn where Dragons reside. An Ue'drahc only ever truly feels safe when in the presence of like kin, Human teachers and friends, or Dragons.

}
If the mother was an Ue'drahc, offspring are laid as eggs and take from one and a half to three years to hatch depending on factors such as size, breed, anxiousness, or threat. If the mother was Human, a child is conceived (through fertilization) and carried within its mother typically delivered at eight to nine months. Childbirth this way is a risky event, as small horns or wings from the baby could injure the mother and endanger her life.

}
The physical process of deterioration by graying/whitening of hair, wrinkling of skin, feeble muscle structure, scale color diminishing, claws or horns turning yellowish in hue and flaky on the surface, etc.