Perhaps the oldest city in Khy'eras' known past, Fellsgard is the home of Cecilia who fought to free the realm from the dominating magic and tyranny of Bhelest. As she had used her father's lighthouses to break the spell over the land, these towering buildings serve as a symbol of hope to travelers. The place became known as the "City of Three Beacons", although only one lighthouse is active these days. Strangely enough, this is the lighthouse that Cecilia died in the night Bhelest was defeated.

After the war against Bhelest's undead army, much of Fellsgard was demolished. As Cecilia was an inventor, she did safe-guard the lighthouses with advanced technology and machinery. The lighthouses were well protected during the fight, but houses and shops were laid to ruins. Debris was pushed out into the ocean tainting sea-life that was used as a food source. Many had considered giving up on the city and letting it wither away despite all Cecilia had done to salvage it.

Among the people that made an attempt to stay and preserve the land was a group of six, native born Fellsgardian mages. Though they were known to citizens, following the war emotions were elevated and the mages resolved that to move forward, they should keep their magical abilities hidden. Communities feared magic would bring about another Bhelest and therefore, its practice was shunned. While cleaning out the ocean and trying to remove the harm that had befallen it, the mages discovered that Cecilia used currents from the waves to power her lighthouses. Through intensive studying, they replicated this knowledge.

The mages revitalized the ocean by abandoning their magic and depended on the elements. Watching their progress, others felt compelled to stay and lend a hand. People were excited about this knowledge of the ocean and hoped to use it to further improve Fellsgard's way of life. Additionally, the mages began to use wind as an alternate source of power as Fellsgard had windmills to the southeast and consistent ocean breezes.

At present, Fellsgard may have reached the point of expanding its walls, but the population continues development by contributing to the city's technology instead. Because of this, Fellsgard is advanced in living style in comparison to places in Khy'eras. 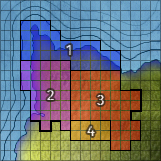 Stretching from left to right is the wealthiest part of the city. Houses are crafted with expensive stone and the few shops and restaurants located here offer expensive items. Between dwellings and roads, there is ample space. Certain residents even own courtyards.

As the busiest sector, the west features harbors and markets where crowds gather to trade and sell any type of ware. Ships typically come and go, but seldom drift far from port due to the surrounding mist. Mac's, a city favorite brewery and fish house, is located not far from the harbors. At the very bottom of the precinct is another set of city gates.

Especially in this section, buildings are nestled closely together on the streets. Alleyways are usually no bigger than eight feet wide and structures are made from frames of wood and layered brick. Nestled in the lower right corner of this area is Fellsgard's transportation hub for trains and airships and on the very right resides the city's main gates. There are small shops such as bakeries, armorers, clothiers, and apothecaries (to name a few).

Living is not so private here and floors of homes are shared by families. In rare cases, a building might be resided in by a single family or those who own shops live on the second floor while their business is kept running on the first.

As the most cramped and poorest part of the city, the Lower District is a "slum". Though not preferred, housing is split between families and this keeps living costs down for the community. There are occasional Fellsgardians who don't favor the idea of shared spaces and as such, they take to sleeping in the streets or alleyways.

As one journeys southeast towards Verdant Row, there are miles of lush farmland (some containing stables) still deemed part of city. Dotted amongst this landscape are windmills which harvest wind energy for the city as secondary form of energy - the first being the ocean.

Stables for renting mounts are scattered outside of the southeastern city perimeter amongst farmlands with a few set up inside Fellsgard's east gates. More traditional animals - such as horses, donkeys, pack mules, and oxen - can be acquired at stables, though occasionally for the more adventurous, a person might find ostriches, massive boars (or pigs), and llamas to ride.

At the southeastern edge of the Urban District alongside the airship stations are three train platforms. Folk may purchase train tickets to and from Verdant Row and Ninraih Station.

In the Trade District, in addition to markets there are fifteen ports for ships. A lot of boats are used for close land exploration, fishing, and ocean cleaning. However, there are three ports that are almost always occupied by ships that offer travel through Res'lora Azure. Since sea voyage is a complicated matter, passage commonly goes to Verdant Row, but a person might book a ticket around the continent to Cetnisadel Bay or Domrhask.

As a forerunner in technology, Fellsgard was the first city to provide airship capabilities and travel to the rest of the world. It is the most expensive method of travel, but that has not deterred people from buying tickets if they want to get somewhere fast. At the travel hub, there are six airship platforms and travelers can buy passage to and from Verdant Row and Domrhask.

When Fellsgard was a modest city and not a prominent mark on the map, decisions were made by a council that was split into five sections consisting of a maximum three people. These groups were forged around the beliefs of an Eidolon. While there was a lot to this structure, after Bhelest and Nihegora banished the Eidolons, the council was abandoned and faded over time.

When Bhelest was defeated and the undead army slipped back into darkness, the city realized it needed a form of government to make things right in the wake of Cecilia's sacrifice. However, reverting to ancient council ways was not an idea anyone was fond of. The city wanted to remain neutral and it was decided that Fellsgard should be led by Cecilia's extensive family. While Cecilia never had children, Cecilia's father created the first section and urged his relatives to join the cause. Each branch became known as a "House" and the council itself was referred to as "The Lineage".

The Lineage's main goal is first and foremost to keep Fellsgard and its civilians safe while maintaining structure and balance. Like the original council, The Lineage is led by five houses and each come together to have official courts that determine what goes on within Fellsgard and its involvement with the rest of the world.

Established by Cecilia's father, this house is involved in the regulation and distribution of any new inventions designed within Fellsgard. They monitor the city's trade, commerce, and transportation. Essentially, Lericyro sees that what gets brought into the city is good for the citizens and vice versa, that what gets sent outside the city is good for the rest of the realm. It is positioned in the Trade District, taking up residence and business in a three-story building, two dwellings away from Mac's.

Arcaod directs the military that forms Fellsgard's army, soldiers that patrol the walls daily, and any operations relevant to the city's defensive strategies. They determine sentences and durations for criminals who commit crimes. House Arcaod claims headquarters in a wide, single floor building that spans across the Trade and Urban Districts, though they have eyes watching the entire city.

The Enlann family maintains the health of the city by ensuring there is enough medicine and food to go around. They approve the construction of hospitals and apothecaries and as there is poor housing in the Lower District, they send representatives to clean the area. In the slums, where houses are shared, diseases can and are spread that need to be cured quickly. Enlann claims no official office and instead is connected and represented through its many hospitals where officials may reside and work, to be greeted for advice and approvals.

Referred to as an "Adventurer's Guild", House Sidrioh oversees job opportunities and posts announcements on wooden bulletin boards which detail who is seeking to hire for a task. Sidrioh investigates land expansion as well and sends able bodies on exploration missions to check new areas. In the middle of the city in the Urban District, House Sidrioh has a headquarter for citizens to direct questions. This location gives them easier access to ships and the airship or train stations.

House Nyshasa, a prime ambassador of Fellsgard's education, arts, and music, sees fit that children (and adults) are learning what they need. Their motto is that in times of despair, hope can always be found in an inspiring sculpture or soothing song. There are whispers and rumors, which have not been proven, that members of House Nyshasa have privately aided in the intellect and training of aspiring young mages. House Nyshasa has a quaint office just inside the Noble District, but trade and educational institutions can be found throughout Fellsgard.

Being on the western coast of Khy'eras, Fellsgard is a central hub for adventurers, traders, and all sorts of folk. It is not full of a single race; rather it is a melting pot of various societies. When Cecilia had been alive, the city was a quiet town that was a fraction of its current size. Over the years, it has grown exponentially advancing in technology, commerce, and exploration.

Fellsgard is generally welcoming, but despite the diverse races that visit, there are certainly prejudices that float about the city. Opinions can be and are formed on race, gender, social statuses, and class of wealth. As an example, a female Fae might be treated differently even when not using magic in comparison to a male Human.

Considering the city's history with Bhelest and the dark energies he wielded to rule all Khy'eras, use of any magic is strictly discouraged. Outside of closed doors, a substantial portion the public does not talk about magic and disregards its existence entirely. Some have even become so delusional that they have forgotten Fellsgard's history and have written into their minds that there is no such thing as magic - that Bhelest's war was just a bloody war caused by a power-hungry man who had no influence based on mystical powers.

Folk who freely exhibit any sort of behavior relating to magical energy are customarily taken away and questioned by authorities. In select cases, depending on the status or popularity of the apprehended person, they are not seen or heard from again. Suffice to say, those who use magic keep their knowledge of it very covert when entering the city, a trend that was started by the six mages that helped restore the city.