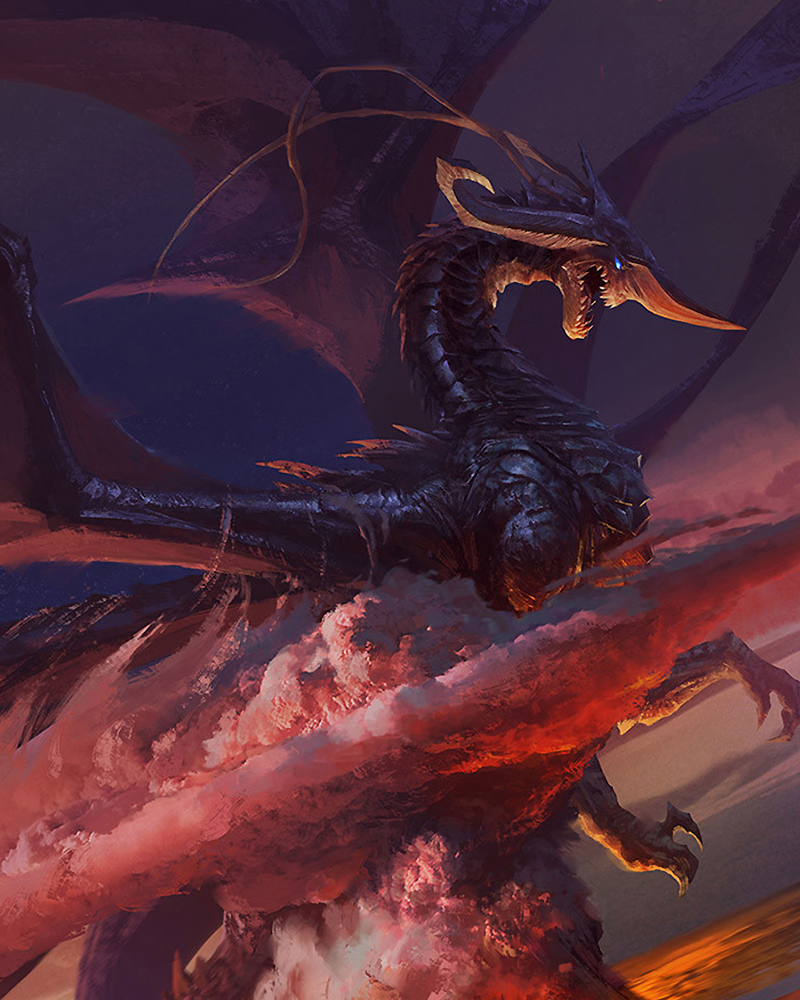 Complexion:
Armored with scales of differing colors
Hair:
No hair, but a few Dragons have feathers along their wings and tails
Eyes:
Any color
Height:
3.5 to 140 feet
Weight:
40 pounds to 38 tons
Other:
Equipped with horns on the head, wing spans of varying length, and/or on select breeds, spikes or feathers.

Strengths:
With an arsenal of natural weapons such as talons, fangs, and spiked tails or spines, facing off against a Dragon is foolish. Dragons are resourceful and will invariably find a way to protect themselves. Dragons can effortlessly rely on their massive bulk and muscle to dispatch foes and have on occasion, simply sat on enemies to get a battle done quick. Tiny Dragon breeds, in contrast, rely on magic or trickery.
Weaknesses:
As Dragons come in an expansive range of sizes, smaller Dragons can be picked off or kept as pets to gradually get sick and wither away. For the larger kin, the beasts fail when it comes to agility. While Dragons are fast fliers in the sky, on land having to turn promptly to avoid an enemy can be troublesome.
Magical Aptitude:
Dragons do not conjure spells in the typical manner that mages do, meaning they do not use wands or staffs. Magic is cast by hand/claw gestures or more frequently, in the form of breath attacks where Dragons will release ice, water, wind, or fire from the maw. They have been noted to speak incantations in situations where healing energy is required. Though not exactly magic, certain Dragons employ ranged mouth attacks of acidic saliva or energy blasts.

Dragons have zero innate, alternative forms that they can utilize. This tidbit might bring up the question, "How can Dragons get around Khy'eras without being hunted?" To answer, it is complicated to keep a gigantic, Dragon hidden, but not impossible depending on the beast's composition. For Dragons that are magically inclined, Glamour enables the creatures to change sizes to miniature proportions for entering cities. Those with advanced skills can utilize Transfiguration to transform into races or animals. Prolonged, recurrent, and sustained practice of either magic type is ultimately draining.

There are even rare Dragon breeds that have scales capable of camouflage permitting the owner to blend in with their environment.

Ixaziel had never intended that Dragons would ever mature - in size and intelligence - as they did. Dragons started as minuscule lizard-like creatures, but as the world around them changed and roaming adventurers trampled over their homes and families, evolution took hold and very quickly at that. The Dragons spouted wings to discover new homes on mountains peaks and abandoned cliffs - areas where exploration proved difficult for unlike races. Horns, sharp talons, and teeth were provided as defensive mechanisms and for an unchallenged number of years, Dragons were at top of the food chain as far as beasts were concerned.

That is, until Bhelest created Nihegora, the reptilian hydra abomination that towered over all Dragons in both weight and height. The Dragons, feeling devotion to their father, heeded the Eidolon's call for assist when a battle erupted over the loss of the Eidolon of Oceans, Pheriss. Though Ixaziel had never told the Dragons, they couldn't object to his summons as they were not granted the will power to do so. But a curious thing happened resulting in the eventual downfall of the Eidolons. After fourteen days of combat, watching their kin being ripped to shreds, and their population dwindling, the Dragons grasped a sense of much needed freedom and abandoned the remaining spirit gods to Bhelest's exile.

For this reason, those who worship the ancient gods have condemned the Dragons for the Eidolons' deaths. There are also some who blame the Dragons for Bhelest ever taking control over Khy'eras. Perhaps if the Dragons had continued to fight, their self-sacrifice would have given the Eidolons ample time to think of a way to defeat Bhelest and Nihegora. Nevertheless, the Dragons do not regret their ancestors' actions and believe the choices made were the correct ones.

Despite any feelings of their own, Dragons have chosen to stay shadowed from society's gaze and it is exceedingly unlikely that a person would ever see a Dragon. Their exclusion from Khy'eras has not hindered them, however. Without interference from the rest of their world, Dragons learned to talk and sought education from covert outsiders. It is rumored that pixie-sized Dragons were sent to find Humans (and ultimately Ue'drahcs) who would teach their kin subjects like reading, magic, and recent events. Folk who brought this knowledge were usually delighted to be among the Dragons. They were inquisitive creatures, relics of forgotten eras and amusingly enough, liked to admire shiny objects such as gold and gems or their own reflections in mirrors for hours on end.

On the other hand, few of these scholars discarded their engagements with the Dragons and returned to cities claiming of the beasts' existence and where they could be located. After several of these rantings had been proven false - as Dragons were not visibly present at the scene - the teachers were ignored and the larger part of Khy'eras' denizens forgot that Dragons were still among the living and doing well.

As Dragons shroud themselves within much of Khy'eras' terrains, the people of realm have limited opinions on these beasts. Dragons - if a person was to question another - are commonly regarded as big and scary, having no suitable position in the busy world. For the curious, these creatures are fascinating and intelligent, worth befriending should the Dragon be seeking an ally rather than dinner. It is advantageous to note that Dragons are noble and base an extent of their interactions on honor with exception of feral breeds that lean towards actions over words.

Humans have become fast friends with Dragons, assisting them through efforts in the Khy'eras timeline. Perhaps this is because Humans are deemed as weak and unempowering, so they lean towards Dragons for support. Not every race (Humans included) will accept Dragons; beasts have been captured and sold on black markets for slavery, their eggs, and locating secret hordes of treasure.

}
Offspring are laid as eggs and take from two to five years to hatch depending on factors such as size, breed, anxiousness, or threat.

}
Introduces magic (if at all), biological events, and hunting techniques.

}
Period of maturity where a Dragon builds a lair, uncovers a mate, and interacts with Khy'eras with a defined range of talents.

}
Extension of adulthood. Dragons are typically comfortable with their stance in the realm and devotes time to protecting territories and absorbing supplemental education.

}
The physical process of deterioration. Dragon muscle mass may be depleted, scales may lose vibrancy, and claws or horns turn yellowish in hue and flaky on the surface.

}
The body expires and eventually fades into the environment where it passes.