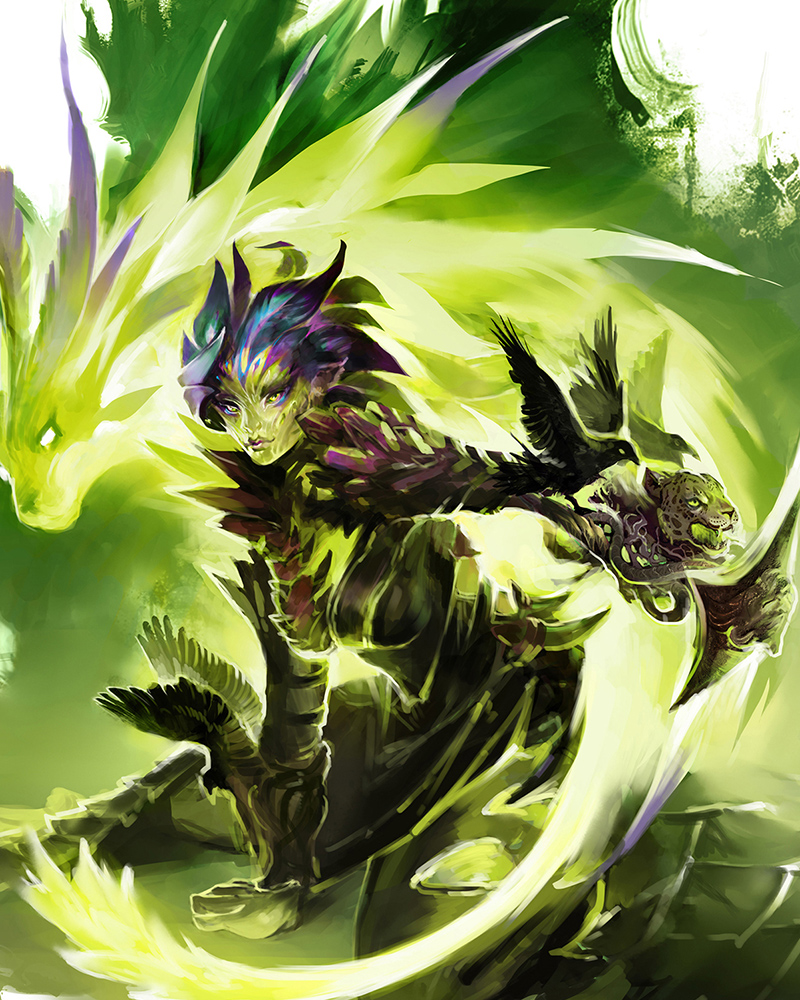 Strengths:
They maintain abilities to take on different physical bodies and can conform to environments when properly educated.
Weaknesses:
Although they live slightly longer than Humans, they are prone to mortal afflictions. Their forms are bound by certain constraints as well.
Magical Aptitude:
To outsiders, a shifting skill may be conceived as magical, but for Shapeshifters, this is a raw talent and uninfluenced by magic. When it comes to Shapeshifters acquiring magic, it takes great deal of practice to learn and like Humans, one is not able to fully grasp the concept until about 18 years of age.

Shapeshifters assume forms of animals, beasts, and select races (like Fae, Elves, and Humans). They cannot randomly change on whim and must study physiques - best done through live, visual contact and touch. Reading about habits of fauna can surely help. For some, this research is a struggle, but for those who desire a shroud or escape from their natural body, it does not take long. Mystical and arcane creatures like Dragons, unicorns, or phoenixes are extremely challenging to adapt into and these forms are rarely achieved, even by the most proficient Shapeshifters.

There are limitations. A Shapeshifter cannot sustain a "between" or "merged" appearance, meaning as an example, the form cannot have a bear head and arms with a Human chest and legs. In addition, transposing is restricted to creatures that are native and real to Khy'eras. An abstract, made-up being (like a gryphon with three heads, fire for hair, and sparkly claws) couldn't be changed into. Finally, they cannot transform into the undead (as this would kill them) or non-living objects (as they would be unable to conjure a thought to change back).

Those who can shift into various forms were not always treated as a Khy'eras race. Morphing abilities were considered a gift, given to a select group of Humans by Ixaziel. Winters after the realm was awakened from ruins and flourished under the care of the Eidolons, folk sought the right ways to live and their purposes in Khy'eras. They understood that for survival people needed necessities such as food, water, and shelter. Unfortunately, they did not quite perceive the concept of "control" and animals and beasts were over hunted - a situation that ultimately brought the land to a state of hunger, chaos, and downfall.

This event predominately occurred among Humans and thus, Ixaziel gathered around a hundred hunters from their ranks and attempted to teach compassion. This proved burdensome as initially Humans could not grasp the knowledge being addressed to them. They questioned why keeping a tight reign over Khy'eras' wildlife was such a bad idea. Needing alternative methods to get through to the Humans, Ixaziel delivered them the ability to feel as animals - birds, wolves, bears, and deer - dubbing the group as "Empaths". The Eidolon assured them this affect was not magic; Humans merely related to the prey's fear and determination during the hunt.

The mind trick proved effective; the hunters realized that a substantial number of their kills had been for ill rather than good. Humans had destroyed mothers and sickly animals and abandoned hides that could have been utilized. With this new outlook, the Humans started to hunt cautiously and populations of fauna that previously dwindled were being rejuvenated. Some even preferred their bestial outlook and lived among the animals they once stalked. Balance had returned.

Shapeshifters were not classified as their own race until Bhelest's death. Though the Shapeshifters claimed their ability was not magical in any sense and instead natural, with Bhelest's release from Khy'eras, this transformed what they could do. While in the past, they experienced as animals, those chosen could suddenly adapt their physical bodies to materialize as the subject. Even more, they discovered with a bit of racial study, they could transform into Fae, Elves, and Humans. No longer were they confined to the "simple" talents Ixaziel had given them.

In several cases, this permitted Shapeshifters to have an upper hand and many used their upgraded abilities to steal, murder, and cause trouble for Khy'eras. When the denizens of the realm determined that crimes happened often with Shapeshifters and less in comparison to unlike races, distrust in Shifters rapidly excelled. After all, what was a person to do when a doppelganger of a loved one showed up on their doorstep and then proceeded to steal an object of value? Because of this, people searched for Shapeshifters and killed them on sight.

There was, thankfully, a selection of Shapeshifters that did not use their transformations for hostile tidings and branched away. As they were familiar with the concept of being both the hunters and the hunted, they presented to folk that not all were bent on deception and wrongdoings. As this revelation passed by word of mouth, the Shapeshifters were no longer referred to as Humans but as their own race. They were allowed to grow again, identical in the ways that Ixaziel taught them to respect wildlife and nature.

Presently, Shapeshifters are scrutinized in the same manners as Humans for the sole fact that a person cannot initially tell the difference between the two races. On their own, Shapeshifters are regarded with caution. The ability to change into forms is seen as a sneaky quality, as evidence from the race's early past. Shapeshifters are inclined to basic emotions (sadness, hate, desperation, etc.) and these feelings frequently turn their ilk into thieves, murderers, or manipulators. Despite select members of the race who fought to prove otherwise, it is still a struggle.

Nevertheless, numerous folk have found Shapeshifters to be useful allies and friends. Shifters are near exceptional with relating to nature and fauna, permitting them blend in with their environment and defend others with competence.