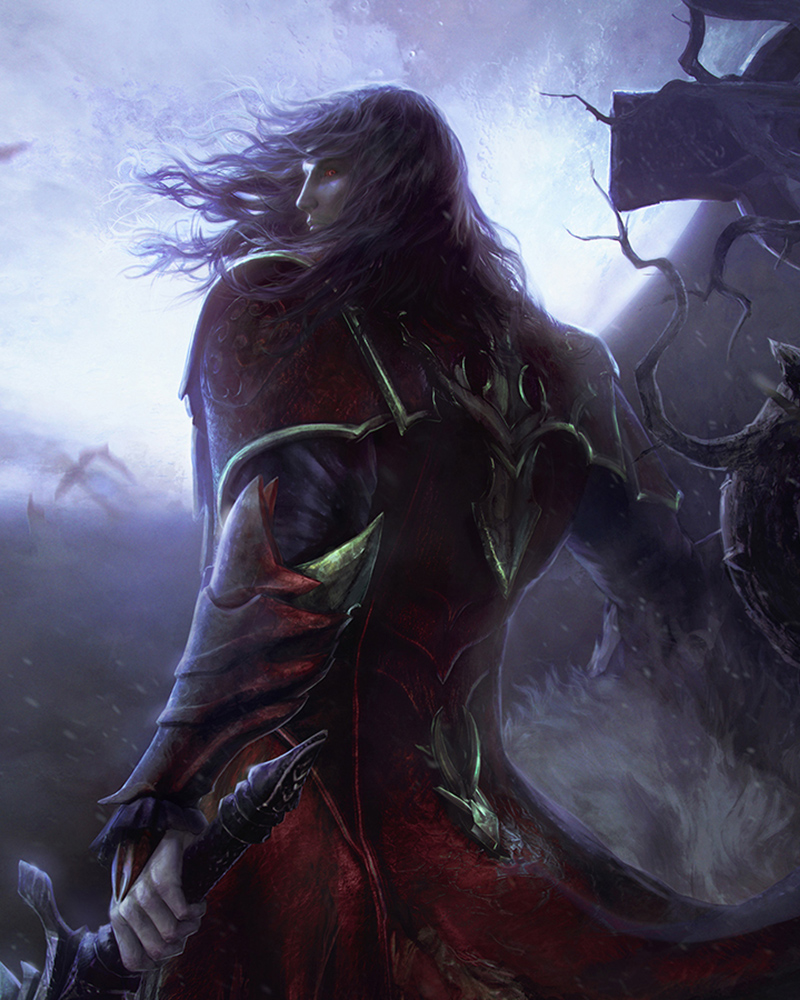 Complexion:
White, brown, or black
Hair:
Brown, black, red, pale blonde, white, or gray
Eyes:
Black, red, or golden with either a white pupil or cat-like, black pupil
Height:
Men: 5'6 to 6'8 feet, Women: 5'2 to 6'2 feet
Weight:
Men: 120 to 190 pounds, Women: 100 to 165 pounds
Other:
Korcai have two upper cuspids about two inches long that are acute and pointed. These fangs are used to puncture a victim's skin allowing the Korcai to drink blood. Fingernails are consistently worn long and filed to knife-like angles to be used as back-up weaponry.

Strengths:
Reflexes and speed are nearly equal to an elf. Specific Korcai have unnatural vigor while others have the ability of flight without the use of wings.
Weaknesses:
They cannot travel during the day as sunlight burns their flesh and renders them to ash. While Korcai would not deem this next mention a hindrance, they sustain themselves primarily on the blood of living races and without this daily nourishment, they are substantially weaker. Holy items or symbols act as repellants.
Magical Aptitude:
Albeit undead, Korcai can use magic and folk speculate that these talents are acquired not through learning, but by drinking blood from victims. However, due to their somewhat corrupt origins, they are unable to cast light magic like Luminosity or Restorative.

Although not a Changeling or wielder of Transfiguration magic, there are few Korcai that attain limited transformation skills with their turning. Two of these shapes are animalistic - the bat or the wolf - and the third is a mist. The mist has capabilities like flight, maneuverability, and phasing through select objects. A Korcai may have all of these forms, a single ability, or none at all. Regrettably, these forms do not make it possible for Korcai to journey with the sun out.

To secure his position in Khy'eras, Bhelest constantly sought ways expand his empire. His company chiefly consisted of the undead (wraiths, zombies, and skeletons), but it included allies that had influence in territories throughout the realm. Amongst these groups was a woman named Victoria Erair - daughter from lineage in weaponry - who staked claim over Baslehr Ridge. Victoria possessed qualifications that made her an unyielding foe and master tactician, but as all her family passed on, a desire drawn from loneliness grew inside of her. She yearned to be by Bhelest's side not only as his preeminent adviser, but as his lady. During weapon deals, Victoria repeatedly presented herself to him as fitting match, but the tyrant mage kept love interests at bay not wanting to get involved in frivolous emotions.

However, Bhelest abruptly changed his feelings on the matter realizing he needed additional weaponry and warriors at his disposal. In his personal thoughts, Victoria was expendable, but Bhelest claimed that he could make her an unstoppable force. Victoria would be granted an army consisting of her children that would be just as formidable. Victoria misinterpreted the word "children" and obliged to Bhelest, but with the condition that he would spend the night with her, hoping that she could convince him they were destined. He agreed.

While night cast shadow over Erair Manor, the mage offered Victoria a two-inch tall vial with a crimson liquid and requested her to drink, stating that this would be the beginning of her force, of Khy'eras' ruin, and their relationship. The last few words sealed any lingering doubt that Victoria harbored and she downed the liquid in a swallow. As the fluid touched her insides, Victoria experienced agonizing pain. She writhed on the floor of the room, screaming and clutching her chest unable to form a coherent thought. Bhelest watched her with glee as the previously confident woman crumpled into an insignificant ball on the floor sobbing until she took her final breath.

It was perhaps two hours afterwards when the still body of Victoria sucked in a sharp intake of air and wrenched her eyelids open revealing red eyes that were once emerald. Victoria's skin was ghostly pale and as she ran her tongue along her teeth, feeling parched from screaming, she realized she had two long, razor-sharp upper cuspids. Besides all of that, Victoria had an urge to remove herself from the floor and rip Bhelest's head from his neck. She felt betrayed... and hungry.

When Victoria rose, Bhelest had already abandoned her. In her anger, she departed the manor and slayed his lurking guards with speed and precision that she never before possessed. Spilled blood elevated the hunger inside of her to intense levels so much so that when fighting, Victoria restrained the guards and ripped open their necks with her fangs. The steady flow of blood into her mouth was revitalizing and she consumed it until the guards were husks of skin and bone.

Victoria's blood-soaked body gave pause to her own guards. She did not attack them and demanded information on Bhelest's whereabouts. A lone guard courageously muttered that Bhelest went to Fellsgard. Victoria then set out to hunt Bhelest and end him, but her constant search was hindered. Despite being a malevolent realm overlord, Bhelest made it near impossible for Victoria capture him. Blood became necessary for Victoria's survival and renewed vigor; anything else as far as food made her sick. The sun was unbearable and scorched her flesh, so journeying was done at night. Victoria discovered that she need not breath to stay alive and this fact convinced her that her that she was undead.

With her new, routine eating habits, Victoria noticed that on a handful of incidents her prey transformed to her kindred. It was eventually determined that the race can inject venom from their elongated fangs - infecting the blood with a virus (much like the one Bhelest used on Victoria), killing the victim, then turning them into a Korcai. This contamination of blood often occurs when a Korcai has frenzied hunger or heightened emotion during a feeding.

With what compassion she had remaining, Victoria taught the fledglings what they needed to know to reside amongst the living. Victoria called them her "Children" - her "Korcai" - and they clung to her advice, confused with their metamorphosis. Ultimately, she ordered them to hunt down Bhelest. As the Korcai wandered, there were certain effects. Notably their population increased and as years passed, the race didn't care if they killed Bhelest's army, or Cecilia's allies, or the random stranger in town. Which was exactly what Bhelest had envisioned.

Victoria never discovered Bhelest. When she heard he was at Fellsgard to defeat Cecilia, by the time she had arrived on the outskirts of the city, the mage was already dead. Victoria could not enter Fellsgard, needing to keep a distance as Ristgir's magic in the lighthouses would harm her. With this event, the woman referred to as the Mother of Korcai, disappeared into the realm. Folk say that Victoria strayed because there was no resolution to be had and that heartbreak and deception drove her off. Victoria was last spotted wandering like an aimless spirit towards Irtuen Reaches, the snow covering her trail of footprints.

To say no one ever wants to get bitten by a Korcai would be a lie. A majority of denizens keep their distance from these nocturnal predators because they don't want to become undead themselves, or worse, be left for dead. On the differing side of opinions, folk befriend Korcai because they find them attractive and alluring, offering their blood freely to a hungry Korcai. After all, it's probably better to bargain with a Korcai rather than engage in combat. An intelligent Korcai will chooses it's food source wisely, knowing that going in a killing spree in a city will likely get them captured and thrown out into the sun in the morning.

Beyond appearances, people don't necessarily attempt to avoid Korcai, but they do keep a distance if one looks particularly famished. There is also an unsaid fear that if Bhelest were to ever rise from the grave, that the Korcai - as members of the undead - would be drawn back into his army. Braver adventurers might take these risks, preferring a partner with the Korcai's speed, feral qualities, and transformations.

}
There is no timeline that defines the growth of Korcai. They are born from death and retain limited, unchanging forms.