Divided by the Slyscera Mountains, the northern frostbitten territory of Khy'eras is where the Dwarven city Domrhask was founded. Naturally, this area is difficult to navigate to due to surrounding geographical obstacles and weather. Read more...
Post Reply
13 posts 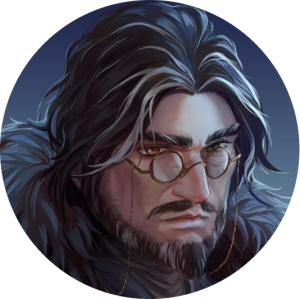 Aldri watched the exchange with the Druid and the cat, an openly amused grin plastered on his features. "Well then, seems you've got quite the tongue for cats. As for games, I do enjoy a bit of Pond from time to time. Are you familiar?" he asked as he removed a well worn stone box engraved with faintly glowing runes. The contents clinked faintly with the sound of metal as he lifted the lid. There was another soft clatter as a collection of stamped metal cards slid onto the table. He collected one and offered it to Velnise as he explained, "A regular deck of playing cards, despite the styling, and I'll explain the rules if you're not familiar."

She took it warily, flipping it over. “I’m not familiar with that game - and metal cards? That’s unusual.” Setting the card down gently, she looked up. “As a druid, I don’t use metal as a rule. The Disciples, ah, strongly encourage us to use natural materials - wood, stone, bone, mostly.”

"Ah but what is the difference between worked stone and worked metal? Neither grows again, and metals can be reforged far more than stone can be unshaped," Aldri countered with a nod. "Though I believe I've a more ragged set somewhere if these just will not do."

Velnise picked up the card again, running her finger along the edge. “I find them curious, but I don’t see a reason not to use them, I guess.” She looked up with a mischievous smile. “I’d like to see you explain your reasoning on metals to the instructors - though I somewhat doubt they’d listen.” Tossing the card to Aldri, she sat back. “So tell me about the game?”

"It is not terribly complex, moreso if you know trick-taking card games," he began, looking briefly to Velnise for agreement or confusion. Seeing she gave a nod, he continued. "First the goal is to collect tricks, but Pond has the added danger of poisons." He shuffled the cards and they emitted a faint clack as they were rapidly rearranged. "Your poison suit, and mine," he said, tapping each card as he dealt them face up.

"These will be worth a negative twenty-five when taken, and-" he collected her card and dealt another, reshuffling the deck after. "You cannot have spades as a poison," he explained. "Now this is your hand for both, five will remain hidden and the other eleven you can examine." He dealt them each sixteen cards. "You will choose your profit rank from the group of three: Ace to four, four to seven, and eight to ten. Once you've selected your ranking remove a relevant card and put it face down."

Aldri took a moment to examine his own cards and did so. "You cannot use a four to indicate a set though, as that would be unclear. When we score, any card in your profit rank is worth fifteen. A card that is both profitable and poisoned is sadly only poisoned. Faces are worth ten, extra numbers are worth five, and aces only one." He collected the remainder of his cards and waited for Velnise to select and do the same. "Face and eight up of spades are trump cards allowing you to take a trick. While the rest are counters that force the other player to take a trick."

"I will deal first, placing the first half of the bait, you will play the second. This is the start of what is called the pond. Whoever takes the trick will take the entire pond. We may also play another card each face down, but that is the leader's decision each time." He tapped his card and then indicated her poison. "I am openly poisoning this pond for you, so it is to your benefit to do the same to me if you can and then further strategy arises with the hidden cards."

Velnise frowned, considered her hand, and hesitantly chose a card to lay down. “And then - are you planning to play a hidden card?” She tapped the edge of a card absently.

"I am, though I promise I am not doing so simply to spite you," he replied with a wink, putting down a second card face down. "Now we play the rest just as a normal game of tricks. There will be four rounds, and a round lasts until we have less than three cards remaining. Let's begin, do not hesitate to ask questions," Aldri said with a grin.
Word count: 760
Top 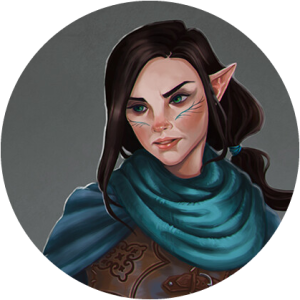 The game sounded deceptively simple - and like most games that involved an element of bluffing, she found the rounds ending in the dwarf’s favor. She started trying to rid her hand of the poison cards, but the strategy wasn’t successful enough to win the round. Then she attempted to actively poison him, but he simply forced her to take the trick.

Her third hand had a number of high-value cards, but they didn’t do her much good, even trying to capture more face cards for points. She tried a combination of all three of her previous attempts at strategy, but Aldri managed to get the better of her every trick. On her last round, she counted and found that she’d actually lost points instead of gained.

At the end of four rounds, Aldri had 135 points to her 30. “You’re a clever bastard, aren’t you,” she grumbled, having finished her rather deep mug of ale. “I’ve never been very good at tricking people, even in a game.” Stacking the cards and handing them over, she tried not to pout about her humiliating loss at his hands.

"Ah, that may be part of the rub. This is strategy more than deception," he answered with a nod as he collected the cards and returned them to their stone case. "Mitigating danger, establishing opportunity, and striking when most favorable are all core tenets of my particular form of battle. You did well though, for lacking in experience. A round on me, and we can settle into comfort?"

Velnise sighed and yawned. “I’m afraid I’ll have to pass on the next round. Maybe another time I’d take you up on it,” she remarked. She turned and saw the frame of the cot leaning against the wall. “Ah, wonderful. I can set up anywhere here, I’m guessing,” she commented, moving the cot closer to the fire before tugging her bedroll from her things. Spreading the bedroll out on top of the cot, she sat to kick off her boots.

“You want to leave before sunrise, yes?” Velnise peeled off damp socks and shoved them into her pack before replacing them with dry socks. She pulled the bedroll open and slid in. “I’ll tack up Aspen as soon as I’m up. I’d appreciate it if you could maybe get us a bit of food from Cadwin before we leave.” Curling on her side, she turned her back to the fire. “Good night, then, Aldri.”
Word count: 421
Top

"Aye, another time then, perhaps when this is done we can trade tales over a few mugs," Aldri answered with a soft chuckle, rubbing at his own eyes. When she asked about sleeping arrangements he simply shrugged. "Only you and me out here, unless the hunters come back tonight." He moved to roll out his own bedroll on the side beside hers.

"Aye, I'll be sure to collect some extra ration, and moving out before the dawn gives a nice little break to the drudgery of plowing through frozen wastes," he offered with a knowing chuckle. Settling into bed he lay flat, looking up at the distant ceiling. "Well night Velnise. May the stars bring you comfort for the coming battles." With that, he fell into a comfortable sleep.

Aldri was about and moving well before the needed time, keeping himself busy with the industry of packing and organizing his packs, pockets, and contraptions. Noticing Velnise beginning to stir, he offered a quiet greeting. "Apologies for waking you- it is well before time we depart. If you are interested though, I believe we could get a meal and collect our supplies as long as we left the coin behind for the boy."

Velnise yawned and swung her legs over the side of her cot. “No worries, I was about to get up anyway. Most likely he won’t mind our helping ourselves - I’ll go ahead and get Aspen ready. It’ll give her a chance to warm up before going out.” She shoved her feet into her boots and made sure her coat was closed before heading out to the stable.

Aldri gave her a nod and rose, returning his projectors to his coat. With soft humming he moved to the supply room, collecting a few extra packs of rations and feed before setting about collecting the things necessary for a hearty, but not overwhelming, breakfast. By the time Velnise had returned, there was a plate of sizzling trail sausage, some pickled eggs, and a bit of oatmeal with rehydrating fruits arranged on the counter.

“By Ixaziel’s bounty, that smells so good,” she sighed as she came in. Rolling her bedroll tightly, she crammed it into her pack and closed the bag snugly. “Oh - by the way, I can tie your pack to Aspen’s saddle. Just give it to me when we head out,” Velnise said, coming over to the counter. Her eyes were fixed on the food.

"I yield to your wisdom in such things, though it may need some rearranging so as not to discomfort your companion," Aldri explained, preparing a quick plate for Velnise and offering it. "For drink, we've not got too much, some water from the day prior and some weak ale."

“Water is fine. Aspen has a hide over her hindquarters for warmth, so unless you have some very pokey things in your pack, she’ll likely be fine.” She took the plate gratefully, gingerly picking up a bite of sausage and blowing on it before putting it in her mouth. Her eyes grew wide and she grabbed the nearest mug to take a deep drink.

"Mind you I make quite the surprising sausage, but usually doesn't make folks drink more right away," Aldri said with a hearty chuckle, taking a more deliberate approach to his own food.

Velnise stared at him for a long moment before snorting with laughter. “Oh, do you then? Should I worry about provisions tonight?”

"I don't believe I've ever given cause for concern, with my provisions or their packaging. If they become the topic of conversation in the evening, that's something to consider then," he returned with a wink.

Velnise raised an eyebrow, smirking, before turning to her plate. "If that's the topic of conversation, I'm better off trying to play cards against you, I think."

Aldri laughed and returned his focus to his own food. Before long he was finished, leaving only the faint remains of grease on his plate. "I've gotten some extra rations for us and your companion. We can get water at the spigot right before we leave. Anything else you can think of to face the mountain?" he asked as he moved to collect both the plates.

She shook her head slowly, thinking. "With the rations we should be fine. Ready then?"

Users browsing this forum: No registered users and 2 guests