Fellsgard is the foundation of Khy'eras' history and through reconstruction, it is now a vibrant and lively city. People reside here due to mild climate, opportunities, and safety and stability. Adventures often start from Fellsgard. Read more...
Post Reply
1 post • Page 1 of 1 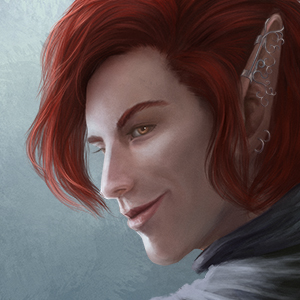 Faryv’s day is a day that Farro tries to forget exists. Each and every year, but no matter how hard he wishes it into being, that abhorrent day rolls around, and he fails to ignore it. Past and present seem to collide within him on that day, memories that he thinks long forgotten and well buried claw their way to the surface of his consciousness. Dredging with them emotions that on any other day, he would swear himself no longer capable of feeling.

Farro finds himself absently rubbing his chest, a dull ache residing there. Flashes of light flicker at the edges of his awareness, an oppressive sensation weighing him down as an all consuming darkness crawls over his skin like so many insects. The citrusy essence of freshly squeezed oranges haunt his every step. It calls to him, calls for him to follow, to seek, to hunt down the source of that bewitching perfume. Always to no avail of course.

With a deep sigh of resignation, Farro dons his commoner's disguise, twisting the ring on his finger before stepping out into the bracing winter's end breeze, making a beeline towards one of the least reputable corners of town. Maybe this year will be the year he can wash it all away with spirits and sink into ignorant oblivion for the day.

The main room of the tavern is uncommonly quiet as he strolls in, most of the usual faces nowhere to be seen, leaving behind only the drifting souls like himself. “Forget it” he mumbles to himself, attempting an internal shake to dislodge where those thoughts would inevitably take him. That was the entire purpose of coming here after all.

The bar keep, a balding man by the name of Jackson, now sagging somewhat around the middle as the hard years begin to take a toll on his body, nods to Farro as he collapses onto a tall stool by the bar, lacking any of his normally effortless grace.

Jackson snorts, shuffling off to retrieve a glass of what passes for liquor in this place, “Make sure it’s a clean glass this time.” he calls to the mans retreating back, watching the man almost waddle to the far end of the bar.

The open fire in the background crackles and spits, the sound so familiar to the fire, the magic that he’d once known so well. Its heat caresses his cheek breeze, not unlike her magic once had. It;s with that the all too familiar torrent of memories, emotions, and pain once more floods his body. The smells, the sounds of those unimaginably bloody battles, how it felt as though he was being flayed alive while his magic was forcibly drawined from his body. The expression of pure terror that was the last way he ever saw her face as she disappeared under a hoard of that idols cursed army of the dead. His head swam with it. A never ending spiral of death, his love and soul being ripped from him in what felt like a single fell sweep.

“What’re ye doin’?” A gravelly, unfamiliar voice says, jolting Farro back to the here and now. He turns on the man with an irritated glare before allowing himself to look down at the words scrawled on s scrap of paper before him. He can hear the onlooker grunt, unperturbed by Farro's attitude as he tries to strike up a conversation with the bar man.

Farro finds himself scowling at the short, far too melancholy and familiar poem sat before him. He didn't have these problems anymore, it was a lifetime ago, more even- and yet every Faryvs day, his traitorous heart drags up her memory. Her life and bloody death, right to the forefront of his mind. Upset and beyond frustrated at his own withered shell of heart, he crushes the paper, launching it at the fire at the other side of the room in a rare show of temper. The words crumble away as the paper disintegrates into ash, piece by piece, not unlike the mind of the man whose heart it was torn from.

Where you will go, my heart will always follow,
For your loss, is one I could not swallow.
So look after it my beloved,
For it is the only one I had to give,
And even though now without you, I am cursed to live.
Word count: 739
Top
Post Reply
1 post • Page 1 of 1