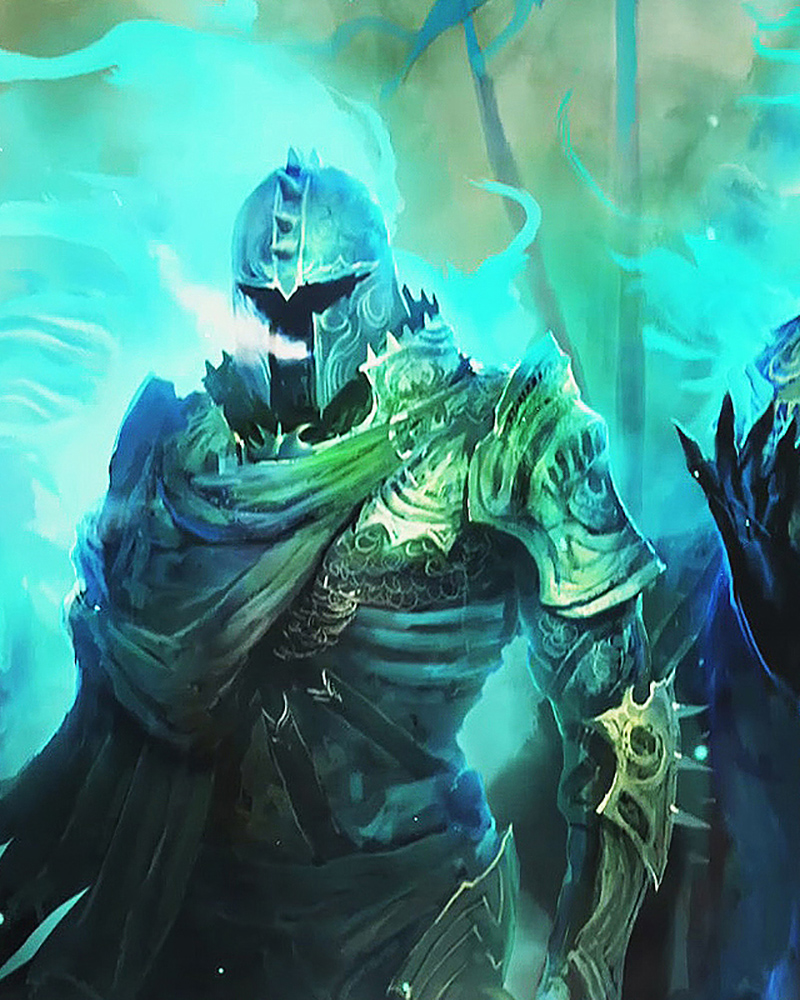 Complexion:
Nearly transparent with subtle flickering shades of pale blue, green, purple, or red
Hair:
^ Same as above
Eyes:
^ Same as above
Height:
Able to stretch up to 15 feet to look more intimidating
Weight:
Unmeasurable
Other:
In any of their transformations, Ghosts display markings from their prior life, such as wounds, scars, or tattoos. Ghosts are only "born" from Lumeacias, Kerasokas, Shapeshifters, Dwarves, or Humans.

Strengths:
Sustainability is a concept foreign to Ghosts as they never breathe or get hungry. When in Spectral form, they are soundless, can fly/float, and with extensive practice, can phase through barriers - like walls and doors - that might block paths.
Weaknesses:
Ghosts can be damaged or killed (again) when in a Solid state. When in Spectral, they may be sealed by magic (such as Luminosity, Restorative, or Necromancy) using an exorcism spell. Mage characters should not go around attempting to get rid of all Ghosts using this method, but it could be played out through story. A secondary "death" in either situation severs them from Khy'eras where they are not seen or heard from.
Magical Aptitude:
Unlike the bountiful undead, Ghosts preserve magical abilities if the body knew the flow of energy before its death. Non-magic users turned Ghosts cannot suddenly obtain magic. In rare cases, Ghosts shape energies with ease since there are no physical or bodily obstructions.

Ghosts generally have two forms - Spectral and Solid. The Spectral appearance is attached to all Ghosts from the beginning. It is a transparent and wavering physique with a glowing outline reminiscent and based on the body of their previous life. This form can also phase through objects or go completely invisible if necessary. In rare cases, Ghosts have been stuck with invincibility for extended durations before folk are able to view them.

A Solid exterior is much more complicated, but in this form, Ghosts perceive and appear as though they are among the living. Newly revived Ghosts are not able to assume this tangibility; they must learn how. Even after this feat of materialization is acquired, Ghosts must focus to retain the alteration. Holding items and wielding a weapon is possible when Solid, but requires immense effort.

In 052 AoN during Verdant Row's establishment and construction, the service stop for travelers was settled by an exclusive visible type of undead - spirits. As these wispy anomalies are not malicious and disregard all emotional affairs of the living, adventurers are generally accepting to their presence. Late one evening when the town was covered in a thick, silver mist and a full moon was brightly suspended in the sky, an unusual event occurred in a Verdant Row tavern altering the way the recently deceased passed into the afterlife. History books describe that Bhelest could bar a spirit's passage and take that being into his keeping, but this future incident would be different.

The tavern's soup of the day - a complimentary add-on to purchased meals - had been poisoned by a vengeful traveler who took advantage of the spirits. Few apparitions stood by gazing, under the assumption that the man was a cook trying to assist. The traveler's goal was to dispatch a group of tavern patrons whom he owed an ample gambling debt. However, in his delight that his plan might unfold, he decided to do away with the tavern's entire audience and loot money from the bodies. And, that unlucky evening, the tavern was packed.

Within a mere two hours where people were merrily drinking and eating before, the floor was littered with roughly seventy clients who were no longer breathing. When the false cook was positive that the poisoned were not waking, the man left the tavern kitchen cackling with sick glee and looted gold, jewelry, artifacts, and precious possessions from even those he had no connection to. A wooden cart was hitched to a pair of stolen horses, which the traveler loaded with every hijacked article and then departed from Verdant Row with a trail of dust in his wake.

Unable to comprehend what had transpired, the souls of the dead rose from their cold, fleshy vessels and levitating a few inches from the ground, realized they were no longer living. In contrast to Verdant Row spirits, they were able to acknowledge and gather thoughts, their awareness filled with sadness and anger. The men trying to collect the gambling debt knew what had developed and followed the fleeing, murderous thief. During their haunt, they struggled with - but achieved - the tactility to pick up weapons and the talent to materialize as if they were living. With these skills and the ability to communicate, the men found their killer and ensured that his lust for vengeance would never spread elsewhere. As the mission that kept them tied to Khy'eras was concluded, the gamblers vanished, passing over into the domain of eternity.

Going back to the remaining Verdant Row souls, few chose to linger on in Khy'eras perhaps afraid to fully die, while the rest carried out tasks that bound them to the realm. After the mass homicide, throughout the land those who perished unwillingly and by unexpected means were able to cling to Khy'eras and continue to thrive in a void of space between the living and dead. There they could interact with denizens of Khy'eras. Frequently surfacing, the beings were henceforth referred to as "Ghosts".

The enduring presence of spirits made the introduction of Ghosts to Khy'eras denizens an easy transition. In fact, over the course of numerous ages, countless folk confused the two and constantly pointed quest-laden Ghosts back to the city of Verdant Row. When people realized that Ghosts and spirits were unique entities, it didn't really matter because they had been accepted and invited into locations all over the realm. And as it turns out, getting rid of a Ghost can be problematic and not possible - at least not without magical devices.

Beyond the apathetic opinions, those who are able to communicate effectively with Ghosts have discovered these individuals to be excellent mentors (there's no better teacher on survival than one that has already died), devoted allies, and the rogues of the sneakiest calibers. That said, a substantial portion of Khy'eras' population dreads any haunted existence - thanks to Bhelest - no matter how friendly a Ghost might be. To the defense of the fearful, corrupt and twisted Ghosts can morph into wraiths, vengeful and blackened spirits with no purpose but to kill or inflict madness.

}
There is no timeline that defines the growth of Ghosts. They are born from death and retain limited, unchanging forms. A secondary passing happens when a Ghost completes a realm obligation, is magically sealed or exorcised, or is defeated in a Solid state.